It's been nice the past few days.  Finally there is time to sleep and catch up on TV and avoid thinking of the craziness that was midterms last week.  I had three midterms and a paper due last week which wasn't fun.

The week of has been for the Islamic holiday of Eid al Adha.  This is a celebration of the event in the Bible when Abraham(Ibrahim) was about to sacrifice his son Ishmael(Ismail).  Instead God sent a lamb to be sacrificed instead.  One of the traditions for the festivity is to sacrifice a lamb along with spending time with family and enjoying large quantities of food.  It reminds me a bit of Thanksgiving for Americans.

As similar to American shopping traditions, the malls in Dubai have had 24 hour shopping hours.  Myself and two other exchange students here for the holiday went to Dubai mall to do some shopping.  I was able to finally find Harry Potter in Arabic.  We stopped to watch the fountain show and were pleased to hear Michael Jackson's Thriller, a Halloween theme.  There were a few stores that were decked out for Halloween, but it's not as big a holiday as in the States nor the small following in Europe.  I was told that Halloween is celebrated to some degree on campus, but since it falls during the Eid break this year, everyone is at home and not at school.  I'll be enjoying Halloween movies and candy tomorrow as well as spending Halloween with family on webcam.  With this semester abroad, I've come to appreciate webcam and the Internet greatly.

I will put in as a side note that quite a few of the other exchange students found good deals to travel to other places during the break.  There are exchange students that went to Istanbul, Nepal, India, and I think Jordan as well.  For Wellesley students, if you are intending to travel extensively during your study abroad, this is a good place to travel from, with Dubai airport serving so many different areas.
Posted by Kaity at 2:10 AM No comments:

One of the first things to be thought of in Dubai is the shopping.  From the modern malls to the old timey souqs.  Last Thursday me and a couple of friends finally made it out to Dubai Mall, the biggest mall in the world.  It was lots of fun, just walking around and around and around. 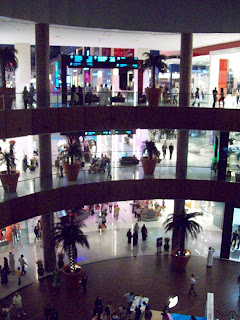 The mall was structured like a layer cake.  Here are the furniture stores, baby clothes and other accessories stores, or jewelry stores with restaurants and cafes sprinkled throughout.  It was overwhelming within the first few minutes, but once you walk a bit and can visualize the basic layout of the mall, it's not too bad.  You tend to use landmarks such as the game corner, the movie theater, or the indoor aquarium. 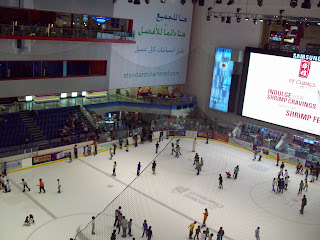 Or you could always use the ice rink as a landmark.  We were considering going, but none of us had appropriate clothing to be fooling around on the ice.  It looks like fun.   We'll definitely have to go skating, maybe sometime after midterms :). 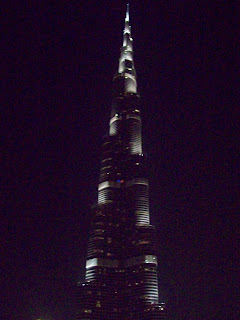 Here is the Burj Khaleefa, tallest building, all lite up for the night.  We went outside to watch the short water fountain show and saw the tower right there next to the mall.  The water fountain show is one of the attractions to the mall, so it was pretty crowded and I wasn't able to get a good picture, but the fountains were nice, not anything spectacular. 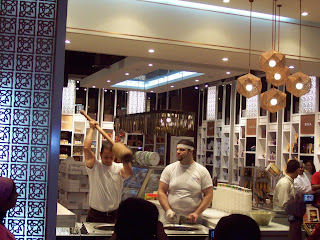 So the picture above and below is of an Arabic ice cream store.  At this point in time I was tempted to get some dessert, but we'd just eaten at Chili's (I know, go to an another country, but get food from a known restaurant) so  I was just too full to consider it.  It was interesting, they were making some ice cream when we walked by.  My friend was explaining that Arabic ice cream has a almost gummy component to it, hence the large pestle and mortar.  The person on the right was tapping the ice cream scoops in time to the pounding of his friend. 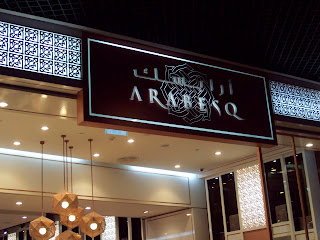 So this was a sum-up of the mall of Dubai, but there was still a lot more to cover.  It was interesting to see brands I recognized from home, next to stores that Michelle(she's from Australia) recognized as being from Australia, and still other stores we didn't know but our third friend Danna(who's family lives in Abu Dhabi) recognized.  It truly was a mix of international cultures.  Now I just get to the mall of the emirates to compare.
Posted by Kaity at 12:21 AM No comments:

So as could be expected the first two two weeks of classes were not too bad.  I had some reading there and some bits of homework.  Then there comes the third week and all of sudden it's like, "Yes school has finally resumed brain, pick up the pace!"  So there has been a lot of work done yesterday and to do today.  I was happy to get to the gym this morning, it will unfortunately be one of the few times I get to leave the room today.

This past week was also the Office of Student Employment job fair for on campus employment and  the clubs/organizations fair.  I didn't go to to the job fair, mostly because visiting/exchange students cannot apply for work through the OSE office.  The Club and Orgs fair was fairly overwhelming and really interesting.  I found out that to be an "active" club, you maintain 1000 members, which to me sounds really big, coming from Guild of Carillonneurs which is at best in the forties and Quidditch team which is somewhere between 15-30 depending on the day.  Palestinian Cultural Club is supposed to have the highest participation rate with about 3000 members.  I did end up signing up for Math Club(its the fun math), Music Club and Performing Arts Club(I would like to play some music while I'm here, otherwise why bring my oboe), Emirati Culture Club, Islamic Cultural Club and Islamic Cultural Club-Women, Arabian Culture Club, and Book Club.  What was really nice was all the food that was being served.  To entice people to join, almost every club had some kind of food item, little sandwiches, marshmallows with chocolate and crushed graham crackers on the outside, mana'esh, donuts, etc.  The Islamic Culture Club had a sweet fried doughball that was dipped in a sweet/bitter maple-syrupy-like sauce.  I can't remember what it's called, but it was really good.

I don't know why my posts keep coming back to food.  The only other thing on the agenda for today is homework and an "Arabic Through Drama" meeting.  This is an extracurricular program for the international exchange students to learn Arabic language through the use of drama and music.  In the end we will be putting on a play.  To track our progress each session is filmed and then will be compiled with the final filming of the play.  We will then have a copy to take back with us, which I think is pretty neat.

Finally, I really did want to post some kind of picture this week, so below is a photo of our exchange group from one of the previous outings.  In it you can see some of the guys in traditional Emirati clothes, the dishdash or khandoura.  It's the male counterpart to the abaya.  It's kinda rude/frowned upon to take pictures of women you don't know(especially those dressed in an abaya), so when I get a picture I'll post one.  They are black but still are very much styled and come in a range of designs.  I've seen some with lace edges and some with black cheetah print along the collar.  It's as much a style statement as anything we might wear in the states. 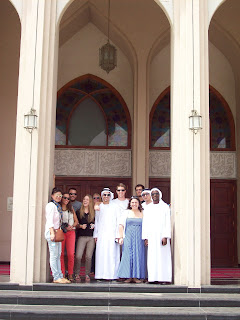 Miscellaneous facts I've learned/highlights over the past week:
1)  Hair Salons here don't have windows.  This seemed very strange to me when I first noticed it until my roommate mentioned something about windows being tinted in buildings here so that if I woman was inside her house she could take off her hijab/abaya.  Which makes sense that the hair salon wouldn't have windows, so that the stylists could cut/trim/fashion the hair without every passer-by seeing.

2)  Grape leaves are actually really good.  My roommate's mom brought stuffed grape leaves to the dorm.  I was hesitant to try them, because the grape leaves I had in my first week here were served cold and tasted very bitter.  I'm determined to get the recipe from her, because these didn't taste like the cold ones.  These were served warm and were very warm and delicious.  My roommate claims the ones I tried that first week were Lebanese style and served as an appetizer.

3)  The freezer is not a good place to store your room key.  I woke up got ready for class and realized I couldn't find my key.  I looked everywhere until my roommate mention when she was coming in last night I was putting the mana'esh back into the freezer.  So I looked in the freezer and low and behold my key was underneath the frozen food.

4)  When planning for classes at your study abroad institution, be flexible in planning, plan for the worst case scenario.  Also if you are taking language classes or such, ask for a placement test.  I've been running into conflict concerning which Arabic class I should take because I took the advice of the intermediate professor and my study abroad program adviser, rather than asking for a placement test/conversation from the beginning.  One of the reasons I have so much homework is to try and catchup as it was decided I needed to be in a more advanced Arabic class.
Posted by Kaity at 10:46 PM No comments: