So this past weekend was another three day weekend to enjoy.  It was the hijra holiday on Thursday, which is the first day for the Islamic year.  So despite upcoming midterm and other homework overloads, myself and another friend, took a trip to Al Ain in the Abu Dhabi emirate.  It was an adventure of itself.  We originally planned to stay until later evening, but ended coming back early.

So we took public transportation which was old, but air conditioned.  It was thirty dirhams to get to al Ain.  My friend thought we were getting stares, but I mean she's tall and I'm really pale which is one reason we stand out.  We sat in the ladies only sections, but there was this kid sitting in the row behind us who kept sticking his head between my friend's and my seats.  That was slightly annoying.

After getting to the bus station in Al Ain, we took a taxi to the mall were we had lunch at Applebees.  I know I fly half way around the world and end up eating at an American restaurant, but my friend had never eaten there, so we got the lunch special and then took another taxi to the zoo.

The zoo was a decent size.  There were lions and tigers and bears (oh my!") as well as lots of African safari animals and monkeys.  The zoo wasn't the biggest or nicest I've seen, but still a nice place to go.  There's a park inside the zoo that big and rather nice.  My favorite part was being able to feed the giraffes.  You really got to see them up close and personal.  There's tongues are really long and they have really big heads.  The weather was also beautiful and perfect, so it only made the day more enjoyable. 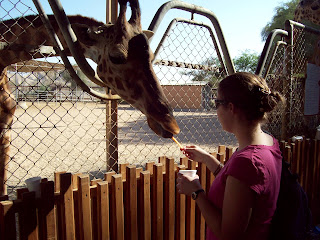 We finished off the day with a return trip to the Al Ain mall and eating at Shahryar Restaurant (Iranian food).  Overall it was a fun and enjoyable trip. 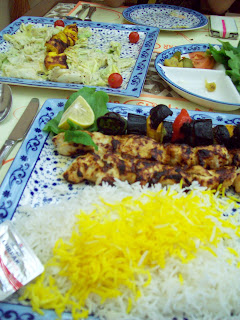 As a sidenote, we went to the movies today to Skyfall.  It was so very very good.  We got waffles will in the theater.  It was a first time for me to eat waffles with Nutella instead of eating popcorn in the movie theater.
Posted by Kaity at 8:46 AM