Ringing in the New Year

Happy New Year!  This new year my friends and I decided to trek down to Dubai Mall and watch the fireworks.  I think the best word to describe is an experience.  We took the metro down to the mall starting from Rashidiyya at about 6-ish.  As the train got closer and closer to the mall, it got more and more crowded.  Then we finally got to our stop.  It was full of people leaving the station and arriving at the station.  I give the transport people props to their organization.  They were getting people in lines and the lines moved fairly rapidly for the amount of people trying to get out of the station.

Then we finally got to the mall.  It was crowded, but Dubai Mall is big enough so that it wasn't shoulder to shoulder crowdedness.  We got to wander around and rather than eating at a restaurant(all were booked or way expensive because of the celebration) or the food court(it was crowded and lines for food, even McDonald's was very long) so we ended up going to the supermarket for sparkling juice and eating at a cafe on the bottom floor.  It was an unhealthy meal of a slice of cheesecake and crackers/pretzels, but all of us had some real food before we left.  Since we found a table at the cafe, we decided to stay there until ten forty five.  There wasn't going to be anywhere else to sit, so why give up seats sooner than needed?  The lines to the bathrooms were extremely long, but it would've moved faster if not so many people were cutting in line.  Grrr.  Somethings really annoy me.

Then there was the fireworks.  Below is some of the pictures a clip of the fireworks from our vantage point.  We first tried to follow the yellow signs that said "fireworks" and "family standing area" but soon ended up in a mosh-pit type crowded, which we then spent another ten minutes trying to get out of and finally ended up at our much roomier if not as good view spot.  The fireworks were really cool, but towards the end, there was so much smoke around the Burj, in my opinion the last bit was as cool because at the smoke blurred colors and there wasn't the stand out of the bright sparks against the dark night and more just a haze. 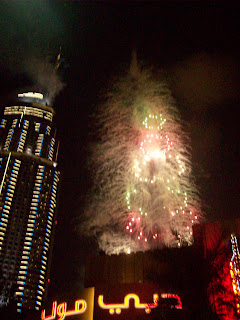 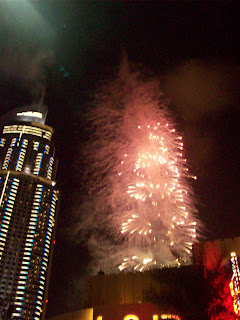 Ringing in the new year was great fun with friends like Danna and Michelle and we toasted the new year with sparkling cider when we finally made it back to the dorms at 2:30 in the morning due to traffic.  Michelle commented when we were debating on going to downtown Dubai or not, that she wanted to look back next new years and comment how she was in Dubai for the New Year's celebration.  Well I guess now we'll have to come up with something just as cool to ring in 2014.  That's also my graduation year!  No reason to rush this year along.
Posted by Kaity at 7:24 AM